Don't Mess with your kitty 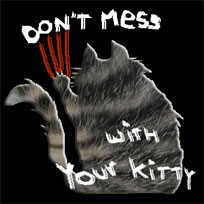 My good friend Mr Puddy asked to hear stories about kitties giving pay back. He also provided this really cool badge to use. If you have not visited him yet I urge you to do so. I also ask that you vote for him as he is up for a blog award. You can click here to vote. Remember to vote often and daily.
I don't have any pictures to share as this was back in the early 90's and did not have a camera at the time. I had a pair of cats that I adopted. I went out to work one morning and they were at my door, barely weened, covered in fleas. One had scratched most of the fur off of her neck. They were named Frick 'n' Frack. (Frick-is-he Frack-is-she). When they were about 6 months old I caught a 3-4 month kitten that was wondering around wild, Socrates, a tuxedo cat.
With my job at the time, about twice a week I had to work a double shift. Sometimes I had to just work a few extra hours. I am not sure who but I suspect the first two were responsible. They did not like it when I was not home in time to feed and play with them. Every time I was late I knew what to expect.
I had a niche cutout in one wall with a shelf on it that I placed my phone. On one side was a trash can. When I got home the phone would be in the garbage. Never failed to miss the can, they were good shots. The second thing they did was to completely remove all the toilet paper off of the roll and spread it all over the bathroom. I learned to close the bathroom door, but did not always remember.
They were always perfect angels, with one sleeping at my feet. Another by my shoulder and the third by my head. I never had to call them to bed. They never got into mischief. They just let me know that I was late and should have been home taking care of them.