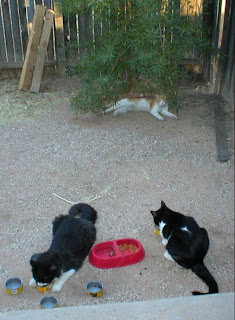 Well here it goes, allow me to introduce my babies in order of appearance. First there is Girl Kitty; Girl is a Tortoise Shell, she is very shy, timid and reserved. If you look up “Sacredly Cat” in the dictionary you will see a picture of her. Next is Squirrel Kitty; she is mixed grays and white in coloration, a domestic medium haired cat. Squirrel Girl is cute and she knows it, she is quite the little diva, and my vets favorite of the bunch. She also wants to be number one frequently picking on Girl (a big no no). Then there is Mitten Kitten; my black and white, a domestic medium haired. The big bruiser, fat cat, and bully. Mittens does not know she is a bully, she just wants to be involved in everything always getting in the middle when pay attention to the others. Which intimidates the others, she is unaware just oblivious and stubborn. Finally there is Lil' Bit; the smallest and youngest of the lot. I am not sure if she is part Russian Blue or Chateaux I am leaning more towards the latter. The whole world is just one giant playground to her and everything in it is her toy she has lots of energy. Lil' Bits is very loving and spends a fair amount of time in my lap.
I guess I should give a brief history of how I wound up a proud parent of these four. Several years ago when I moved in to where I now live, the owner had a no pet policy. While there was some wild life, lizards and such I thought I would put out some bird seed. I would regularly have birds around but they were not the same as a pet. Besides I am not much one for birds. This went on for over a year then I noticed some cats starting to hang around my yard. They looked to be complete strays and half fed so I started to put some food out for them. They stayed around and would let me pet them. I could always clam I was just feeding the strays and still did not have pets.
Well some would come and go, a few hung around spending most of the day here on weekends (I did not know about throughout the week). So I started to name them. I had a pair of black and whites and a yellow and white that were always together. The yellow one looked petty ragged, I forgot what I named him (you will see why in a min). One of the B&W's I called Kong because it would chase the yellow one from the food anytime he ate, the other would just walk up and push him away from the food so I had to separate them so that the yellow one could eat. After a cat would stick around for a month or so I would name it. Most would shortly disappear, then the 2 B&W's disappeared after being around for several months. By that time due to the summer rains I had started feeding them inside leaving my back door cracked open so they all could come and go at leisure. The yellow one would sleep in my bed most nights.
After the 2 disappeared I stopped naming cats, it seemed they would disappear shortly after I named them. Having reason to believe that the yellow and white cat had fleas, I bought a flea collar for him. A couple days later he came back with “Hello, my name is Twinkie” written in pink ink on it. I found out from my neighbor that the 3 cats belonged to the grand children of the people across the alley. The daughter had moved out taking both B&W's the yellow belonged to different granddaughter. Twinkie would hang around for a long while almost 2 years. I did not mind him staying around so much as he did not appear to be taken care of or fed. It is because of him that I have such a large family. I do miss him and hope that they are taking better care of him than they use to.
Posted by Bryan at 7:50 PM