﻿ ﻿ When Squirrel first showed up she was the invisible kitty. I would hear her come in to eat, but whenever I tried to look she was gone. Sometimes I would get a glimpse of her tail, all big and bushy. Coming in really hungry one day she let me walk into the kitchen while she was eating. I could not get to close at first, but soon was able to sit beside her while she ate.


I tired to scratch her behind the ears but she would just wine ehhh ehhh ehhhhh. Mumbling into her meal, because she did not stop eating. (Skinny cat see second pic) Using her head as a pivot point she would circle around the can of food. Needless to say she was not too friendly nor was I able to get close unless she was eating.

She started to hang around the house, sleeping in a box or on a blanket. At this time Girl was still spending a lot of time under the beds hiding from everything. Being skittish Squirrel would chase her trying to start a fight. They got into it once, that I had to break up. Two days later I noticed Girl was licking a cut and took her to the vet. I did not connect the two events until the vet said it looked like a puncture wound on Girl's tail. A couple of bite marks actually. Those two have not gotten along very sell since.

One day while my brother and his wife was over she finally let me pet her. She became loving very quick after that. Soon she became a lap kitty, jumping on my lap most anytime I sat down. When I would come home from work she would run out to meet me rubbing against my legs. Looking for some loving. Following me everywhere, constantly wanting to be near her daddy. She has never like to be held, will squirm and wine until she is put down. Then right back to rubbing up against me, wanting to get petted. Most importantly NO belly rubs, Squirrel does NOT like. She will attack. LOL

Squirrel's favorite hobby is to chase Girl. She will lie in wait outside the bedroom door for Girl to emerge then chase her back in. From across the room if she sees Girl walking she will leap up and give chase. She came in as head cat pushing Girl out of the way. She started sleeping with me taking Girl's spot on the bed.

Squirrel really enjoys playing, chasing after balls through out the house. She would take a toy like the first one pictured and toss it 5-6 feet into the air and jump up to catch it before it hit the ground. The second toy pictured (I circled the attachment) she would chase around the house. She would jump over 5 foot into the air to get it. She would run after a string, when she caught it she would do a flip. Just roll right over grabbing it on the way. Then Mittens showed up while trying to join in she was pushing Squirrel out of the way. 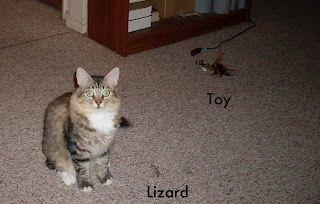 Squirrel had attitude when she first showed up. What with her chasing Girl, growling and mumbling at me when I tried to pick her up. Still though she is the brave one. When someone comes in she will be out to see who it is, if she approves she will even rub up against them. She really likes “M” and will jump onto the couch to get petted by her.

Then came Mizz Purrzzy, who would chase Squirrel under the bed like she did to Girl. It surprised me at first . But like I said she changed a lot calming down becoming more loving. So maybe that is what it was. Having to fight for attention may be good for her. She has started to come out once again. Playing with almost the same abandon as before.

Well that is Squirrel, loving, outgoing, a ham that loves to have her picture taken. She is just so photogenic that I have more pictures of her than of any of the others.
﻿﻿
Posted by Bryan at 11:58 AM