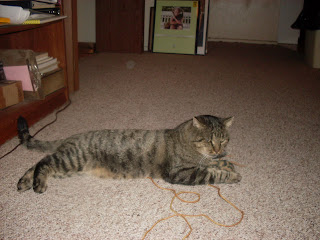 Today’s pic is the Martian. Another one named by my friend and neighbor ( who I will start calling M as that is the first initial of her first name) Well M though his growl and fighting voice sounded weird. When I would mention the stray she would say “you mean the Martian” Well he has been hanging around for a long time. I saw him off and on again for a couple of years. More recently he started hanging around more and more. I figure him as feral, because he would not net me get anywhere near him, and when I was able to sneak up on him he would hiss and swipe at me.


I started feeding him every time he was around, he started to come around more often. At first he would stay just past arms distance. I would sit down near him while he ate, each time I would put my hand out towards him he would back away. Over time I got closer and closer to the can of food I put out for him to eat. Then one day I was able to run my finger across the back of his head. He would growl at me kinda of like the way Squirrel did. This was after several months. A few months later I was able to pet him between the ears. Over time I took more and more liberties with him, getting closer along the way. He is now to the point that I can pet him and walk up to him with out him running away.

I got bit and scratched several times along the way trying to get him to this point. Now I can put my arm alongside him and pat his side and rear. He will eventually try to strike out at me, but does not mean it. He will bite me to let me know he does not want to be touched, but will not bite hard ( does not break skin) and will take a swipe at me. On occasion his swipe will draw blood, if he can catch me unaware. He is slow on the draw and I usually am able to pull my arm back before he can get me. I believe this shows he is getting use to me and does not really mean me any harm. He wants to still show his independence but does not want to harm me. He is a gentile giant.

At first I thought he was totally feral, what with the way he would run away and hiss and growl at me. He would not let any near him, but instead would run away. He was very aggressive and vocal. The sounds he made when another cat got near and he was ready to fight is why M called him the Martian. It is a very strange and unusual sound for a cat to make. Not at all like the normal growl and hissing you would expect. He still sounds like this so I have named him Martian.

` I found out from the father of my neighbors who live behind me ( I will call him R as his first name starts with it) that his neighbor had a couple of cats. Then R tells me the owner moved away leaving his cats behind. R asked if the Martian was female knowing that the guy had a cat that was Grey with black stripes, I figure that this was Squirrel (who has been with me a couple of years) as the date he said his neighbor moved is close to the date I acquired Squirrel. But I think Martian is his second cat because he is very wild but knows the sound of a can being opened and will approach when he hears it. So this cat has been out on his own and getting wild a couple of years longer than Squirrel who was pretty wild when she first showed up.

I have been able to tame him enough to let me pet him and rub his ears while he is eating. I can also put my arm along side of him while petting him. He will still sometimes get mad an strike out at me but usually is slow and I have time to pull away. However he has gotten me on occasion leaving his mark on my arm, where he will nip at me or take a swipe at me. Over all he has calmed down a lot from when he first showed up.

Today is Wednesday, on Saturday I let him in for the first time. I can pick him up while he is eating but not have tried to hold him, he still is somewhat wild. I have pulled him up enough to get his paws off of the ground and then let go. No swipe growl or bite when doing this, so I figured he was ready to come in. I am hoping his previous relationship with Squirrel will help. That is why I let him in so he can see her and realize it is OK.

This only worked so so, Squirrel growled at him, and he went into fight mode. He came in an wondered around for about 10-15 min before Squirrel started in. This was his second time in and after about 15 min.. They got serious and ready to fight so of course all of the other cats in house wanted to join in. I ran into the kitchen and there was Mizz Purzzy squaring off ready to fight Squirrel along with 6 other cats. I had to spray them all with water to keep from having a major cat fight on my hands. ( I keep a spray bottle filled with water on hand) The Martian went out as he was nearest to the door.

I let him in several times a day now and it is funny as the other cats will run to see what is going on and will make a circle around him watching to see what he does. He still takes a swipe at me with his paw. But I hope to rid him of that soon by letting him in, thinking he will see how the other kitties will act. Each time he is in between 30 min and an hour. He surprised me by playing with a string that I use with the other kitties. So step by step I am getting him to calm down. I expect within a couple months more he will be like the other cats and will let me pick him up with out him trying to attack.

He is a BIG Kitty, he look malnourished when I took him to get nurtured. But they weighed him at 14 pounds. My bowling ball kitty Mittens, who is fat and overweight(round like a bowling ball), still only weighs just over 12 pounds. He is my Big Boy because he is so tall and weighs to much. He reminds me of a bobcat or a lynx because of his size. When they neutered him they treated him for worms, I believed this helped as he no longer looks malnourished. I bet he weighs close to 16 pounds now. He is almost as tall as my knee and is very long as cats go. It is odd to see him play with a string, which I use to entice him to stay inside. That helps him do more than just come in and eat.