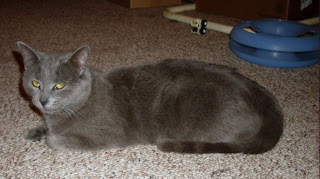 Well it has been just about a year since I last updated this blog, I had pretty much given up on it. But my friend and neighbor keeps encouraging me to write a blog about my cats. She doesn't know that I had started one before. (I think she is tired of hearing me brag about my cats).
Around this time last year I was worrying about work and had some personal problems getting me down. I looked and could not tell that anyone had even visited my page, which didn't help. Being somewhat superstitious (which is how Girl got her name or lack there of) I stopped because my babies were getting sick, just shortly after starting the blog. I almost lost one, came close to having another go blind.
An URI (Upper Respiratory Infection) started going around, most of the strays I take care of and all my cats got infected. First Mittens started sneezing for a couple of days followed by Squirrel. After which Girl followed by Lil' Bit. In that order, after a few days Squirrel was not as active and I was worried that I might have to take her to the vet, most of the others got better in couple days. I was working only 15-20 hours a week and money was getting tight, so I kept a close eye on her. After the fourth or fifth day she started getting better (just as I was about ready to take her in) , Lil' Bit on the other hand was in her third or forth day and stopped eating and drinking. You always can tell when she is drinking as she makes a bell like ringing sound when she does. (One day I will post a sound clip, it is cute) For being the smallest and yet most active she will drink about twice as much as the others so I will constantly hear this through the day.
After 2 days of this I took her to the vet. They gave me some antibiotics and eye drops. I already was using a syringe to force some water down her, worried about kidney failure. That was on a Wednesday on Friday I took her back to have her stay over night so they could give her an IV. They gave me some special food to feed her when I brought her home the next day. For two days I forced her to eat and drink. On Monday she started eating and drinking on her own. I was very relived. The doc said that her kidneys should be fine, they checked while she was there overnight. I was concerned that I was not giving her enough, still it was another day before she went to the potty.
Just as she got better one of my stray kitties, (belongs to my neighbor across the ally) was in a somewhat bad way. He was keeping one of his eyes closed, the other half opened and not acting as normal. When I looked at his eye it scared me. The only way I could describe it is to look at a dead fish in the market, red, dry and sunken in the center like a volcano. So I kept him inside and used the rest of the medicine I had left on him. Three days later his owner came around looking for him, said she had some medicine for him. I gave him over to her, not sure if she had and medication for him or not. They let him run around outside though. They are the kind that will get a cat, let them run around and might put out some dry for them. He is better not but the lens in that eye is a bit cloudy. TJ (Tom Jones, named by my friend) can be a pest sometimes like right now, bugging me. Otherwise he seems to be OK.
That my dear readers brings you up to date on what happened and why I had stopped. Next post I will pick up where I left off. Giving you the back story on how I got each of my babies, and then from there keep you update on them. I plan to post at least once a week maybe twice a week while telling you the back story on each. Please forgive me as I am new at most of this and I am sure the site will change and I learn, and hopefully get better. For now here is a picture of Lil' Bit.