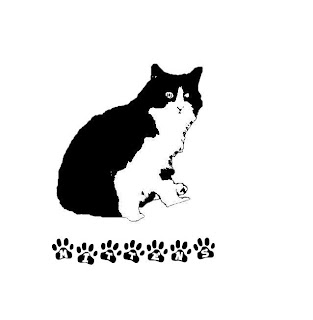 I figured that they had moved and taken Twinkie with them. Now though I had a new problem to deal with. Three cats is my limit, one could get lonely by herself during the day. Two or three would have someone to play with, especially with Girl always hiding. But I was not quite ready for a new cat. Due to some recent purchases I was running a little short on money and Mittens was pregnant. The Humane Society charged $65 to spay $20 if knocked up and $10 a shot, running a little over $120 to spay her. But only $35 to drop off a cat, I managed to scrap up the money and with a heavy hart abandoned Mittens to her fate. She had not been around enough to show her personality and had not gotten her named but with white paws I gave them that name for her. I then went home and told the other two that from now on they were indoor kitties only. It was getting hard to lose cats, Twinkie had just disappeared 2 weeks before. I was going to start to wean off the strays from coming around feeding them every other day and getting longer between feedings.
I was able to keep an eye on Mittens at their web site (http://www.hssaz.org/) to see if she got adopted. This was August of 2008, the following month they had a special on adoptions of older cats (over 5 months) less than half price $25. At the end of September I brought her back home. She has been here since, although I don't think she has totally forgiven me for leaving her. From the second day she showed up she slept with me and was affectionate. Used to purr regularly and loudly, only meowing for food. I have yet heard her purr after I brought her back, and she rarely sleeps with me now.

As I said before she likes to be in the middle of everything, when SK would start playing with her favorite toy MK (Mitten Kitten) would jump right in. SK would back off and leave, eventually losing interest altogether. This is when SK started stalking Girl regularly. I would constantly have to chase MK away, also every time I would open a can of food she would be right there. I would have to chase her out of the bedroom so Girl could eat. As soon as Girl is done and I open the door MK is right there seeing what was in the can. She has to eat some out of every one that is opened. It seemed she was always in trouble for one thing or another. I noticed she likes paper, one day I had put a bill down on the floor and she tore it apart. My personal shredder.
So a lot of time was spent working on getting Girl to open up and SK to stop chasing her. Mittens no longer slept with me, I don't know if it was because she was not allowed out or upset because I abandoned her or because I had to constantly discipline her. Either telling her no or after a while I started using a squirt bottle with water. She is just a big dumb brute, but I love her. When I come in the house I have to almost step on her to get her to move, most times wind up having to push her out of the way. She is stubborn, I pick her up take her to the next room to get her to leave Girl alone and she goes right back. My problem child
Posted by Bryan at 1:17 PM